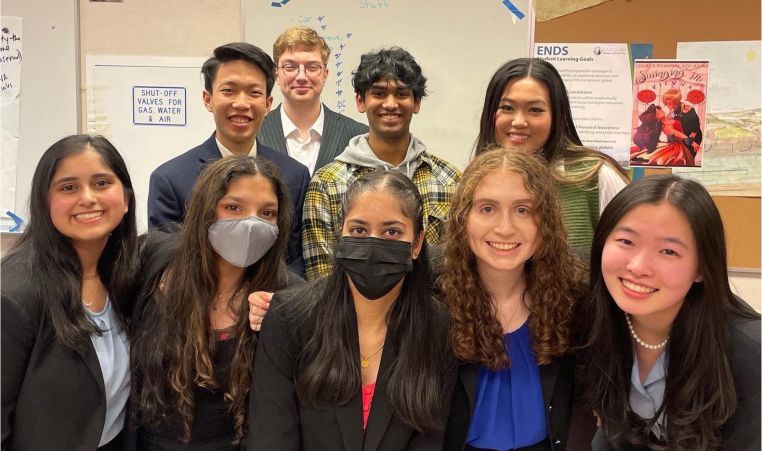 An unassuming thrill junky and mountain biker was left busted and broken by a biking accident that occurred on the trails of a mountain resort. The question this fictional tort case brings to question is: who’s to blame? Who will make the best and worst case and who in the end will bear the burden in response to this harm?!

Hundreds of Washington state high school students have been working tirelessly to answer just that. Acting as counsel and witnesses for both the plaintiff as the injured biker and defense as the mountain resort, students across the state prepared to compete in the Washington State District and Statewide Mock Trial Competitions run by the YMCA. Dressed to the nines in suits, ties, button ups, and blazers, you could tell from their virtual backgrounds these students took to the best lit walls in their rooms, staked out their family living rooms, were sprawled out in their high school classrooms on a weekend, or gave us the illusion of some prim space with blank virtual backgrounds. Ranging from straight-faced to silly, they were ready to deliver their roles in this fictional court case written by the Washington State Mock Trial chair and honorable Clark County Superior Court Judge Robert Lewis.

This year’s case “revolves around a simple idea – responsibility. When someone is harmed in our society, we have rules about who will bear the burden… That, in a nutshell, is what the law of torts is all about.” Judge Lewis wrote in the case introduction.

The YMCA Mock Trial State Championship took the top 24 high school teams from around the state to compete against each other presenting different sides of the case to judges and jurors in the state finals on March 10-13. Washington Supreme Court Justice Mary Yu presided over the championship round between the top two teams, which was live-streamed by TVW on Sunday, March 13 at 11:30 am.

Judges and attorneys from across the state volunteered their weekend in March throughout the four days to preside over the trials and serve as jurors, rating the students on their performance.

The weekend long event culminated with the championship round between Skyline High School and Seattle Prep, two very competitive and well-respected teams. The victor was Seattle Prep who will go on to represent Washington State in the National High School Mock Trial Tournament in May. This year’s National Tournament is hosted virtually by Michigan State.

Mock Trial is one of the two flagship programs run by Washington YMCA’s Youth & Government office. Our programs work to give youth tangible and hands on experiences to engage civically, learn about democracy in practice, and find their voice. We are in our 75th year of youth civic education programing in this state.

Other major supporters of Mock Trial in Washington includes the Administrative Office of the Courts, TVW, the Washington Judges Foundation, the Attorney General’s office, Washington Bar Foundation, the Honorable Robert J. Bryan American Inn of Court, and the District and Municipal Court Judges’ Association. And of course, the hundreds of legal professionals, teachers, adult mentors and volunteers who help us put on the show.

For more information on how to start a team or volunteer, contact: