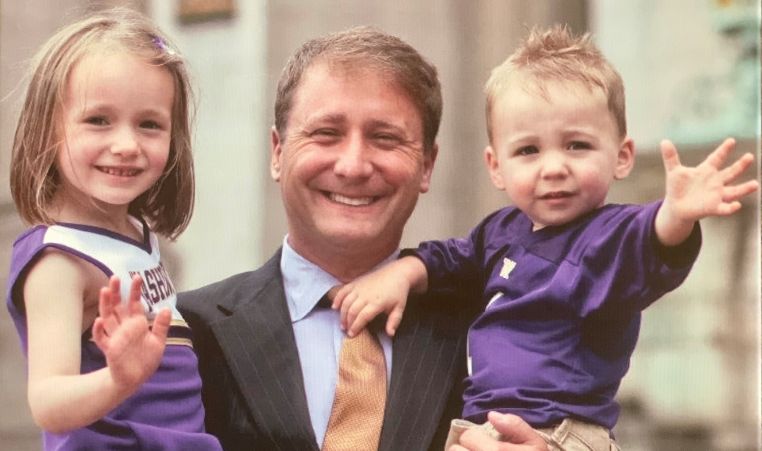 Get to know Mike Egan, who has volunteered on the Board for over 20 years, through our Question & Answer session!

“Don’t wait, you can make change now. In fact, most change around the world is sparked by a youth movement."

Q. How are you involved in Youth & Government (Y&G)?

A. In high school, I loved student government, and saw a flyer for this program our local Puyallup YMCA was hosting. My first year in Y&G captivated me as I discovered civic engagement and government and was thrilled with the chance to go to Olympia and sit in our elected leaders’ chairs. My sophomore year I served as the House Reading Clerk, and learned quickly the power of the microphone as I could turn on and off each mic from my place at the podium! I then moved to the Senate and loved researching bills, and the advocacy and lobbying needed to convince your fellow lawmakers’ of your bill’s merits. My Youth Governor my senior year (Sung Yang) and I ended up in college together and today we both serve as board members for Y&G. I’ve now been on the State Board for over 20 years, and it continually reminds me of the passion, engagement and fun I felt back in the 1980s. And the friendships formed then are still close today and include leaders in every walk of life around our state, an instant and lasting network! It’s a program that we need now more than ever and I’m just hopeful we can expand that opportunity to everyone.

Q. Did your Y & G experience lead to other government engagements?

A. It did. Speaking on the Senate and House floor gave me great confidence and injected the political bug into my blood. I became active in my school’s debate team, went to the national debate tournament, and served as Puyallup High School’s Student Body President. That prompted me to then continue student government at the University of Washington. I served as the UW Vice President when our current Attorney General Bob Ferguson served as Student President. I then went on to serve as the UW’s Student Body President my senior year. Helping to lead a campus of 35,000 students often brought back lessons learned first in Y&G.

After graduation from the UW, I followed a dream started in Y&G and moved to Washington D.C. I served first on the staff of Congressman Norm Dicks from Tacoma, and then went on to serve as a Legislative Assistant to U.S. Senator Patty Murray. I spent a decade in D.C., taking the civic foundation Y&G brought me to the floors and aisles of our U.S. Congress. Just as we would put together bills in high school that formed our Y&G bill book, I was able to help write legislation enacted into law in our nation’s capital.

That work then led me to a position with Microsoft. It gave me the chance to return back to the Pacific Northwest and help Microsoft build its government affairs team and political outreach. I had the chance to manage Microsoft’s political action committee and host leaders from across the world as they visited the Microsoft headquarters for policy discussions and employee engagement. In each of these civic endeavors, I often looked back to the days of Y&G, and its fundamental values of democracy, respect, collaboration, and civility.

Q. What do you focus on today in your work?

A. Now in my 23rd year at Microsoft, I’ve had the great honor over the past five years to build a Microsoft team focused on community engagement and economic development across the U.S. called TechSpark. I help manage a team of community managers in locations from Miami to Fargo, from Green Bay to El Paso, and from Los Angeles to Chicago. In each region, we learn a great deal about the needs of differing communities, partnering with non-profit groups doing amazing work, and finding ways to use technology to grow businesses, upskill citizens, and drive STEM education.

Q. Any words of wisdom for young people?

A. Don’t wait, you can make change now. In fact, most change around the world is sparked by a youth movement. From anti-war movements, equality and justice reform, to environmental and sustainability concerns, the united and energized voices of our youth often set the course for transformative change.  Speak out at your local city council meeting, write a letter to your newspaper editor, create a website that betters your community’s needs, form a club in school, volunteer for a political campaign, run for a Y&G office, recruit fellow students for Mock Trial, just engage!