Honoring Black Leadership at the Y of Greater Seattle

Honoring Black Leadership at the Y of Greater Seattle 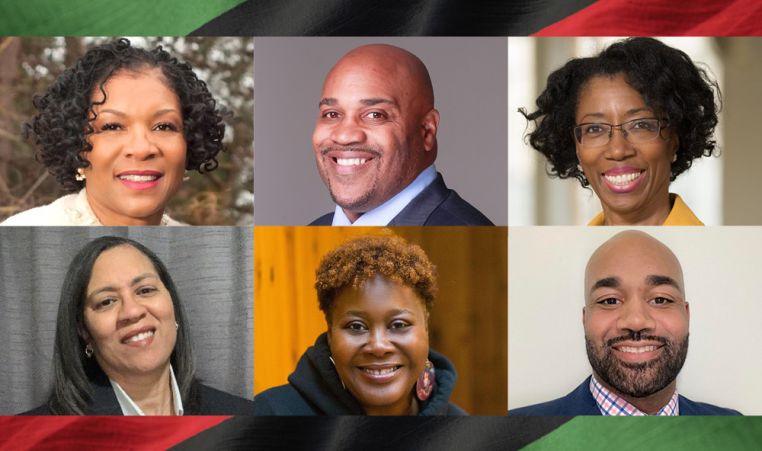 As part of our Black History Month celebration at the Y of Greater Seattle, we’re showcasing our organization’s Black leaders.

Each of these leaders come to the Y from different backgrounds, but one thing unites them: their work at the Y is a calling. Every day they dedicate themselves to a healthier, safer, and stronger community for all.

Loria has previously served as the Chief Operating Officer of StolenYouth, an organization dedicated to ending sex trafficking in Washington State. Loria also previously served as Executive Vice President at Intellectual Ventures, where she led a $5 billion invention investment fund. She also served as CEO of Honeywell Intellectual Properties. She currently serves on the Board of Directors of Laird Norton Corporation, Governor Inslee’s Social Supports Leadership Advisory Group, and the Board of Legal Momentum (Women’s Legal Defense and Education Fund). She previously served on the board of TiVo Corporation and the National Board for Girl Scouts of America.

Loria has been responsible for shaping our organization's long term strategy, delivering on program commitments, nurturing relationships, and empowering a diverse leadership team to broaden the impact in the Puget Sound region since February 2019.

“Action without vision is only passing time, vision without action is merely day dreaming, but vision with action can change the world.” – Nelson Mandela

Alonda Williams serves as the Senior Vice President and Chief Experience Officer for the YMCA of Greater Seattle, one of the largest non-profits in the state. In this role, she oversees Membership Experience, Marketing Communications, Digital, Member Donor Services, and Research as well as serves as a member of the Senior Leadership Team.

Alonda has over 20 years of leadership experience across technology, education, and the nonprofit industries. In addition to the Y, she has led teams for several companies including Microsoft, Verizon Wireless, and Qualcomm as well as Bellevue College. While Alonda has deep subject matter expertise in Product Management, Marketing Communications, Fundraising, and CRM, she is equally passionate about people development and coaching.

Alonda has also served as an adjunct instructor at Rutgers University and Bellevue College where she taught Marketing, Human Resource Management, and CRM. She has also taught several corporate leadership development programs through City University. Additionally, she is a TEDx organizer where she has brought communities together for three TEDx events.

Outside of work, Alonda is committed to empowering young people, with a particular focus on young girls. As an author and publisher, her children’s book series Penny and the Magic Puffballs, is designed to build healthy self-esteem in young girls. Alonda is an active board member and volunteer with several nonprofit organizations including Committee for Children, Jack and Jill of America, and Delta Sigma Theta. Alonda is married with two adult children.

"Be the change you wish to see in the world." – Mahatma Gandhi

Coach, as she is known, also served as OCPS Dean of Students, responsible for discipline and school safety and Safe Coordinator, responsible for counseling students with mental, emotional, and behavioral challenges.

Coach has been with the Y of Greater Seattle since 2019.

"Make a way out of no way" – Barack Obama

Shaquan has worn multiple hats throughout his career. He began his career in New Jersey in 2007, where he worked his way through the YMHA and YMCA ranks, gathering meaningful experiences along the way. Shaquan has hands-on and supervisory experience in all departments of the YMCA and is responsible for implementing of the first Day Camp and school-aged childcare site for the Wayne community. While in NJ, Shaquan led the development of the multi-statewide strategy for engaging at-risk youth, which led to the development of the 7th Grade Initiative. He continued to work with the NJ and PA State Alliance to create the Middle School Initiative - where all Middle School students received access to the Y to increase physical activity, develop social skills and improve leadership skills. Shaquan later partnered with Board members and led the opening of a 25,000 sq. ft. satellite branch in an underserved community, focused on providing access to those who otherwise couldn’t afford the YMCA.

“If you’re not making someone else’s life better, then you’re wasting your time. Your life will become better by making other lives better" – Will Smith

Kelly Guy has spent her over thirty-year career fostering community partnerships and developing programs intended to improve the well-being of individuals and families. Some of Kelly’s career highlights include:

Kelly has been with the Y of Greater Seattle since 2019.

“Just as a tree without roots is dead, a people without history or cultural roots also becomes a dead people.” – Malcolm X, Audubon Ballroom, January 1965

Greg Lewis is the most decorated Husky Running back of all time. He was named First Team All-Pac-10 and Pac 10 Offensive Player of the Year in 1990. Lewis was awarded the 1990 Doak Walker Award, given each year to the nation’s top college running back, was named a First Team All American, and finished seventh in Heisman Trophy voting that same year. As a Captain on the 1990 team, Lewis won the team MVP and Most Inspirational Player. Greg excelled in the classroom and received the Pac 10 Medal of Excellence accomplishments on and off the field. In 1991 Lewis was drafted by the Denver Broncos of the NFL.

Greg continues his work in sports by serving as an analyst on numerous television and radio shows over the past 20 years. He currently serves as a color commentator for the Washington Husky Football team on KOMO Radio.

Over the last 20 years, Greg has held leadership and executive positions at the UW Athletic Department, Boys & Girls Clubs of King County, and University of Washington’s Office of Minority Affairs & Diversity.

“You can't separate peace from freedom because no one can be at peace unless he has his freedom.” – Malcolm X