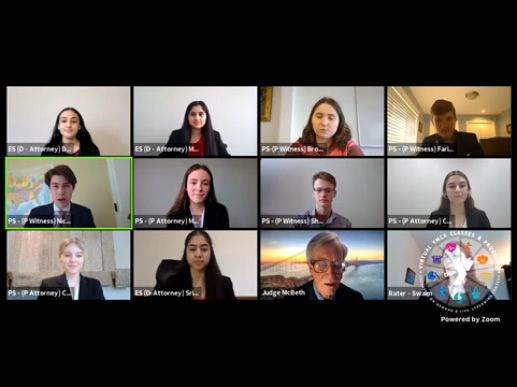 Washington Supreme Court Justice Mary I. Yu presided over the championship trial, held virtually on the Zoom platform. The championship round followed three days of virtual competition between 24 teams from high schools across the state, with attorneys and judges volunteering their time to score teams and preside over the trials.

The top 12 finalists of the competition are as follows:

The William Downing Values Award was presented to Holy Names High School, the Dome team, for exhibiting values of sportsmanship, respect and professionalism promoted through the YMCA Mock Trial mission.

The Best Attorney award for the tournament was a four-way tie between Paden Nichols of Seattle Prep, Bobbie Patton of Franklin High School, Lucia Musacchi of Wenatchee High School, and Victoria Smith of King’s High School.

The Best Witness award for the three day tournament was awarded to Sarah Gourley of Cedar Tree High School in Clark County.

The competition began Thursday, March 18 with 24 teams from around the state — winners of their district competitions — competing in four rounds via Zoom, arguing the prosecution and defense sides of a fictitious criminal trial in which a protester is charged with assault and malicious mischief after angry speeches and political clashes.

The YMCA Mock Trial program began in 1987 and is part of the YMCA’s Youth & Government program which helps students experience democracy in action. Mock Trial allows students to participate in true-to-life courtroom drama before real judges in real courtrooms, gaining an understanding of the law and the role of the judiciary.