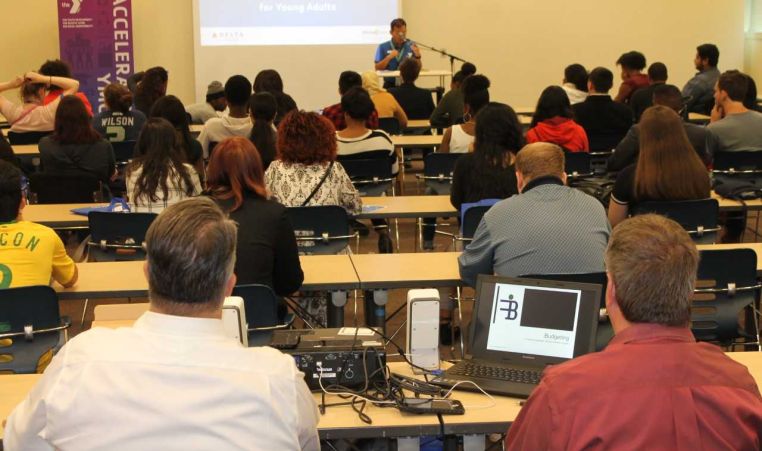 SEATTLE, WA 9/12/18 – Accelerator YMCA hosted Level Up, a life skills and job fair event that drew nearly 150 youth and young adults for a one-day event at The 2100 Building.

Workshops in the morning helped young people build life skills, brush up their resumes, and participate in mock interviews in preparation for the afternoon’s job fair. The job fair was a new component of the event that came at the request of previous participants who wanted more than to learn new skills.

Level Up was generously supported by Delta through sponsorship of the event and day-of volunteer support. Delta volunteers provided one-on-one support to young people looking to brush up their resume before the job fair. Their support paid off, as 25 contingent job offers were made at the event. The job fair featured Amazon, Dunn Lumber, Enterprise Holdings, Forever 21, Fred Meyer, KWA Korean Women’s Association, Lowe’s, Nike, Nordstrom, Safeway, Seattle Goodwill, Starbucks, and YMCA of Greater Seattle.

“Almost 150 young people, aged 13-25, chose to spend a summer day inside learning skills they will use for years to come. Kudos to Delta and WorkSource for sponsoring this event, and to the employers and volunteers like Safeway, Amazon and Starbucks that not only taught workshops but hired young people at the event”, said Mark Putnam, Executive Director for Accelerator Y.

The event was also supported by Uber, who recently awarded Accelerator Y with ride credits through their Community Impact Initiative. The grant provides rides to youth and young adults to get to and from goal-related meetings and appointments such as job interviews, doctor’s appointments, and apartment viewings. Sixty rides were provided during Level Up to help participants access the event.

The day concluded with a raffle followed by an ice cream social, allowing for participants to network with one another and celebrate the day’s successes.

The YMCA of Greater Seattle is the Northwest’s leading nonprofit organization strengthening communities through youth development, healthy living and social responsibility. Founded in 1876, the Y reaches more than 253,000 people of all backgrounds, abilities and financial circumstances annually through 13 branches, two overnight camps and more than 200 program sites throughout King and south Snohomish counties. It nurtures more than 142,000 kids and teens to develop their gifts and give back to our community and engages nearly 23,000 volunteers who contribute more than 372,000 hours of service each year. Visit seattleymca.org