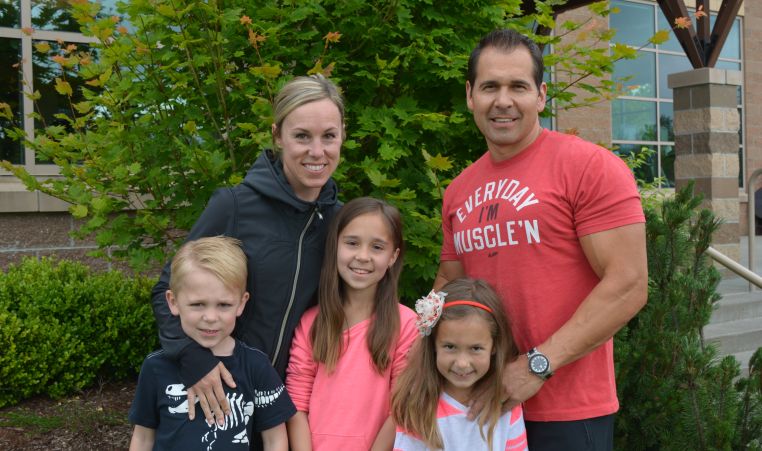 Jay and Nichole Spears have been members of the Snoqualmie YMCA since February 2014. You probably see them at the Y almost every day of the week. They both are very passionate about fitness and appreciate the Y because of our amazing Kids Zone program and the friendly staff.

Jay and Nichole have been together nearly 14 years and just recently celebrated their 10-year anniversary. The Spears Family has resided on the Ridge since March of 2008 and have three children: Ayva - 9, Elle - 7, both at CVES, and Axel – 4 who attends Discovery Preschool. This busy family also has a Charcoal Lab puppy named Ryder. Jay graduated from Central Washington University as a 2-sport athlete that received numerous accolades in both Football & Track (indoor & outdoor) during his time at CWU. Jay is currently a West North America IT Sales Director for a specialty IT Services Company. Nichole went to Washington State University and for the past eight years has owned her own company, Olive and Star, where she works as a graphic designer.

When it comes to fitness goals, Jay & Nichole both feel people at first should set a good foundation before taking it too seriously – “it’s a marathon, not a sprint,” Jay says. Equally important, they noted that setting realistic goals and acquiring the right knowledge is a key bookend to acquiring your fitness goals. Jay stated, with the numerous amounts of content out there on the web, he’s constantly educating himself around certain programs/routines that best suits what he’s looking to accomplish and always encourages others to doing the same. Different strokes for different folks … “you should only be competing with yourself”.

Jay enjoys giving weight training and fitness advice and encourages other members to know he is approachable – no egos or judging by him.

Jay and Nichole are really looking forward to YMCA T-ball starting soon, and Jay will be volunteering as a coach. Spending time with the kids is of the utmost priority, but in their free time or besides being in the gym at the Y, Jay likes researching/analyzing health trends while Nichole REALLY enjoys DIY home improvement and interior decorating projects. In the fall, they enjoy attending Huskies/Seahawks games and socializing with friends and family both far and near.