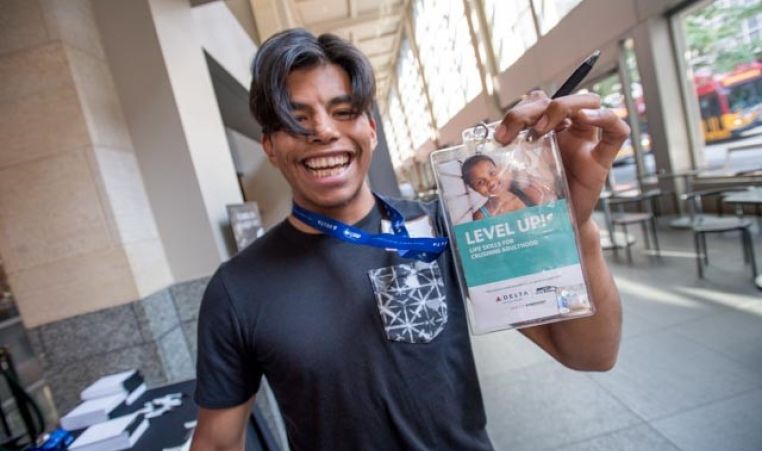 On August 22 & 23, 150 young adults gathered at Benaroya Hall to attend the Accelerator YMCA's Level Up! life skills conference for young adults. This event was made possible by support from Delta Air Lines & Seattle Seahawks.

The two-day conference featured over a dozen breakout workshops led by professionals from a variety of fields, including technology, banking, law and music. A resource fair was open throughout the conference, where participants could gain information about services available to them in King County.

Chuck Arnold, Chief Operating Officer of the Seahawks, and John Caldwell, Delta Vice President - Seattle, served as keynote speakers on Tuesday, each sharing about their own path to success. Perseverance and consistent hard work were central to both of their messages. Attendees were also surprised by a video message from Seattle Seahawks wide receiver Doug Baldwin, pumping up the crowd to take it all in and crush adulthood.

Day two of the conference began with keynote speeches and a lively question and answer with KIRO 7 News Anchor and Seahawks Legend & wide receiver and current Seahawks broadcaster Steve Raible, and Seahawks Legend & cornerback Marcus Trufant. Both speakers reflected on the importance of teamwork and having a positive network of people to seek advice from. The event concluded with remarks from youth emcee and Accelerator YMCA participant, James, and a spirited raffle including gift cards and signed sports memorabilia.

Attendees of Level Up! walked away not only with a new set of life skills, but also with a renewed feeling of self-confidence and excitement for what’s to come as they enter into adulthood. On their way out, a participant remarked "It was inspiring and makes me feel hopeful for the future."