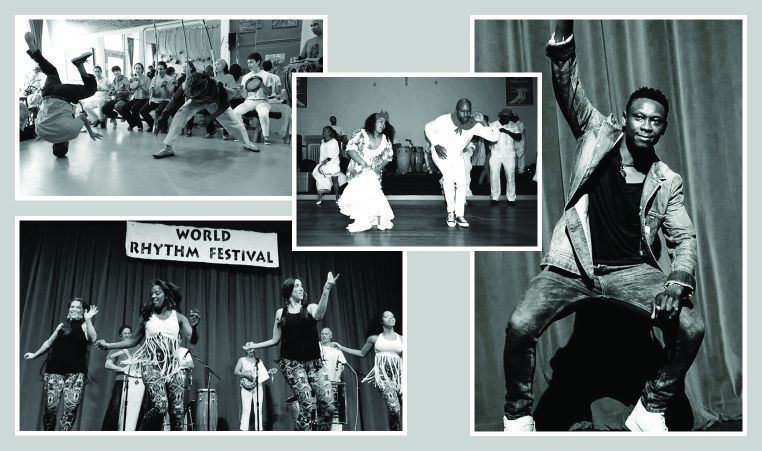 To celebrate the cultural traditions of the African American community during Black History Month, we will be offering cultural fitness workshops taught by Seattle artists with roots in South America, Africa and the Caribbean.

Keep reading to learn more about each instructor!

Originally from Togo, West Africa, Kokou has spent over 15 years honing his professional dance and performance skills. He’s toured Germany, France and Belgium with various groups, and was in residency twice at l’Ecole des Sables in Senegal (Germaine Acogny).

Since 2010 Kokou has worked on an original movement technique called “Magan.” He integrates elements of Capoeira, hip hop, yoga, Tai Shi and pan-African contemporary dance styles into his repertoire, in addition to his mastery of the traditional dances of Togo.

Mark Lilly began his studies of the Afro-Cuban Arts at Portland State University. At that time the former college athlete was searching for a way to connect with his African ancestry. The study of Orisha dance provided the foundation of spirituality, politics, ideology and aesthetics that he was looking for.

Lilly’s teaching style focuses on technique and the development of spiritual energy through dance. He currently lives in Seattle where he performs with Bembe Olele and teaches folkloric song and dance.

Dora Oliviera has been performing and teaching Afro Brazilian dance for 28 years. Her professional dance career began in 1976 after graduating from the prestigious Federal University of Brazil. She joined the renowned Brazilian Folkloric dance troupe, Exaltacao A Bahia. Her impressive repertoire include jazz, ballet, modern and African dance.

Silvio Dos Reis has dedicated his life to Capoeira for the past 30 years. He started teaching Capoeira in Brazil and moved to Seattle in 2004. Since then he has been teaching after school programs at Seattle public schools, Capoeira workshops and ongoing classes at Evergreen State College, Western Washington University and University of Washington.

As a way to promote Capoeira in the community, Silvio runs his own Capoeira school in the International District. The International Capoeira Angola Foundation, a non-profit where he offers regular classes for adults, youth, kids and toddlers.

Originally from Guinea, West Africa, Manimou began his formal study of djembe with at the age of twelve. He poured all his energy into learning rhythm and dance and soon came to the conclusion that in his life he only wanted to create music and art.

In the last few years Manimou has played with many of Guinea's most prestigious artists and performance groups. His Dounia Djembe Drum and Dance class aims to create a cultural experience that exhilarates, educates and forms deep cultural awareness of his heritage. Manimou now lives in Seattle where he teaches and performs, while also traveling regionally to share his culture.

"Sohoyini" translates literally as 'one heart' in the Dagbani language of the Dagomba people in Northern Ghana. Sohoyini was created in efforts to unite cultures and celebrate our diversity through the beautiful dance and music of Africa.

Sohoyini is a pan-African collaboration of traditional arts embracing the music and dance of countries from Ghana, to Zimbabwe, to the United States. Energetic movements, exciting music, and colorful costumes boldly accentuate Awal's presentation of the traditions in the rhythm and dance of Africa. The company celebrates not only their roots, but the branches of new global culture. Although a mix of cultures, all efforts are extended to ensure the dances performed are true to tradition.

We hope to see you in a class!

Have fun and explore rich traditions of dance and martial arts rooted in African and Caribbean cultures. Classes are taught by authentic artists living in the Seattle-area with roots in South America, Africa, and the Caribbean.