Board Spotlight: Hira is a community advocate and determined leader

Board Spotlight: Hira is a community advocate and determined leader 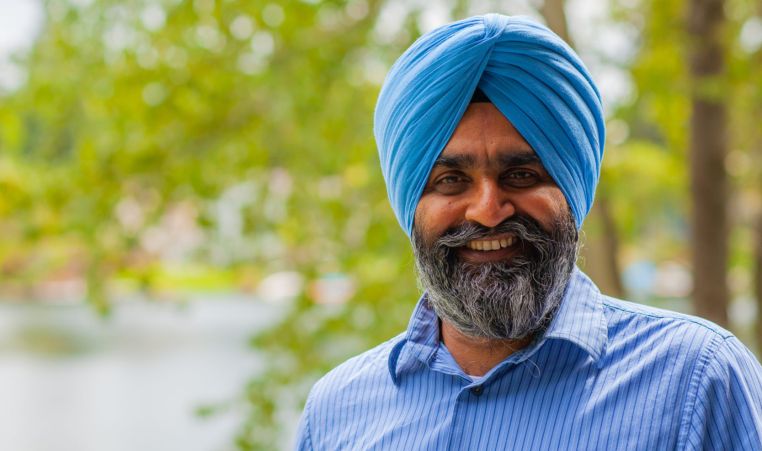 Hira Singh Bhullar is the Senior Software developer for Starbucks and serves as a board member of the Kent YMCA. Hira is the son of a farmer, born in Ferozepur City, India with very humble beginnings.

Hira moved to Seattle in 2001 for better job prospects and marriage. Even with a degree in engineering and experience teaching Computer Science at the university level, finding work in the U.S. was not easy. He shuffled between Tennessee and Georgia but felt like he didn’t belong. From being forced to cut his hair (strictly forbidden in Sikhism) for employment, to being subjected to racial slurs, his identity as a Sikh man was challenged in many ways. He never felt entirely safe, fearing that somebody would accost or attack him.

A background check that took nearly 4 years as he waited his turn to take the oath to citizenship, greatly hindered his ability to travel. It was not until 2008, that Hira truly felt welcomed when he joined Starbucks and made Kent his home.

When 9/11 happened, Hira had never felt threatened in Washington. Sure, we had mean comments on his Facebook page when he ran for the Kent City Council. But that just fueled his determination to take care of his fellow Sikh brothers and sister, including immigrants and members of minority religions.

He took it upon himself to give back to his community in every way he could. He began to serve as an active community leader aligned with important causes important to communities across Kent, lending his voice to numerous causes ranging from public transportation to affordable housing and immigration reform. He actively participated in efforts to bridge communities, break down stereotypes, and lift up the voices of marginalized communities in Kent and across Washington State. His voice has been an important one in efforts to combat hate crimes and harassment based on race and religion.

He says, “I like to serve and use the three pillars of Sikhism to guide my work in everything I do. They are Naam Japna (Remembering God through meditation), Kirat Karo (Earning a livelihood by means of earnest, honest efforts, and endeavors) and Vand Chakko (Selflessly serving others)”

Hira currently serves as a board member at four non-profit organizations. The Kent Youth and Family Services, Khalsa Gurmat Center, Kent Schools Foundation and the Kent YMCA. When asked what his vision was for the Kent YMCA, he said “I saw a shared purpose with the Y that attracted me to serve on the Kent Y board. That purpose is to build stronger communities and opportunities for every child, family and resident of Kent. I envision a community space where our Indian elders feel welcome, our low income families have an affordable and accessible place to thrive and our little kids can happily play in the pool”.

Hira recognizes that there is a lot of work to be done but has a vision that when he retires, to go back to his city in India and pursue farming, just like his father did.

Join the Y as a childcare teacher, lifeguard or kids instructor

See project highlights and learn about how the Kent Y will serve the community.