Through Our Eyes: Art Show

Through Our Eyes: Art Show 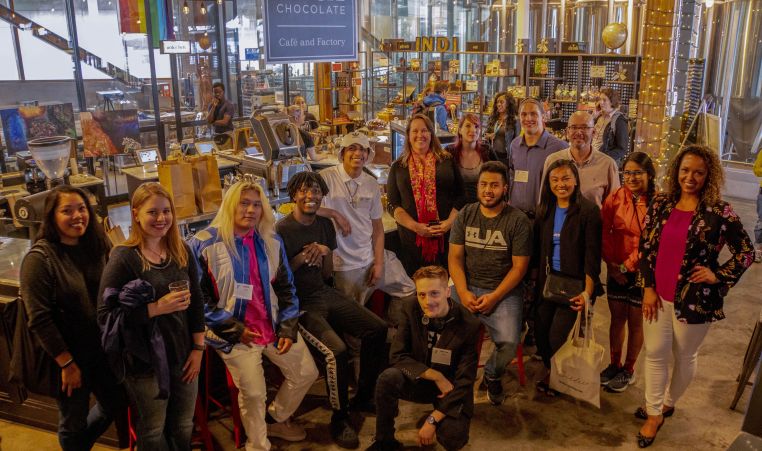 “Thank you for giving me a chance to show my work and giving me the sense of meaning I’ve been needing.” – YAIT Art Show Participant

To passersby, indi chocolate looks like a specialty chocolate shop nestled in the new Pike Place Marketfront. But on June 19th, indi chocolate was transformed into an art show unlike any other. For one evening, residents of the Y’s housing program, Young Adults In Transition (YAIT) showcased their art together through an exhibition called Through Our Eyes”. Artists had the opportunity to share their stories and talk about the meaning behind their art with community members and supporters of the Y. By the end of the night, $1,600 of art was sold; the impact, however, was so much more than that.

Erin Andrews, the owner of indi chocolate and a mentor for Accelerator Y’s entrepreneurship program, Community Carrot, generously opened her space up for the exhibition. Erin’s excitement from the evening reached the rafters of the business. “Let’s do this again!” she proclaimed, “we could do this quarterly, or sooner if you would like.” That excitement matched the highs of the artists, who all celebrated each other and their sales that evening.

A highlight of the night was during the brief program in the middle of the event. Attendees heard from Tyreesha, one of the featured artists and brains behind the event. Starting with a “knock knock” joke about a mermaid, Tyreesha captivated guests with her story, her connections to her work, and to her experiences with YAIT. Throughout the event, Tyreesha drew in attendees to her work; a large tome of collaged artwork expressing her connection to family and lived experiences.
Another participant, Erin, shared his story: going from living on the streets, addicted to drugs, and dropping out of high school, to being several months sober, housed, and graduating high school with a 4.0 GPA. Erin credited his success to the support that he received from Christy Suida, Case Manager for YAIT.

Through this event, it was clear that the sense of safety and community fostered through the YAIT program had a profound impact on the participants and the incredible art that they produced together. Several of the pieces will be displayed at the Y’s drop-in resource center for young adults, located at 2100 24th Ave S., Seattle. If you are interested in touring the space and viewing the art, please contact Emily Meltzer at emeltzer@seattleymca.org.

Learn more about the Y's housing programs. The Y is the largest provider of housing for young adults experiencing homelessness in King County.

You Can Help End Youth Homelessness

The YMCA Host Home program matches young people (ages 12-24) with hosts in the community who can provide the space and opportunity for young people to build independent living skills, gain stability, and focus on goal attainment.