'Look Up & Aim High': A Message from the Only Woman General Secretary Across the Y Indian Movement

'Look Up & Aim High': A Message from the Only Woman General Secretary Across the Y Indian Movement 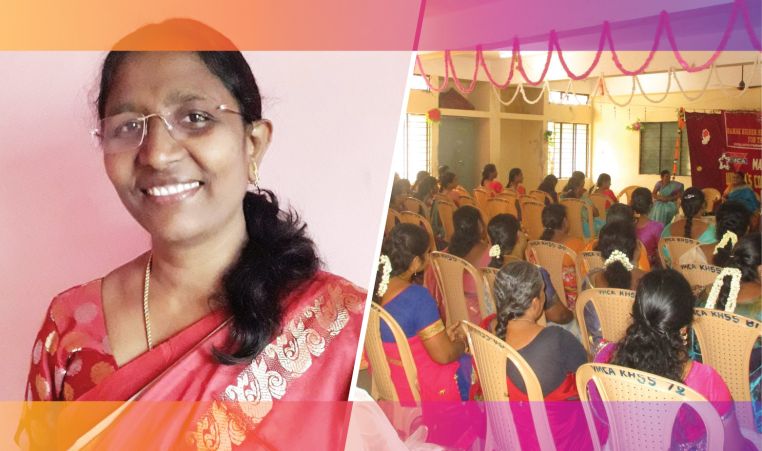 How it All Started

I started my career in the YMCA 28 years ago at the age of 22 as a social worker at the school for the hearing impaired after completing my Post Graduate Degree, Masters in Rehabilitation Science with specialization in hearing impairment. With my passion to work for special children and their families, I started my career, counseling parents, preparing case studies and repairing hearing aids. I am so thankful to Reverend Suyambu, the then General Secretary of YMCA Madurai, who encouraged my work and created space for me to develop my ideas as projects. Within a year, we initiated a new project for young deaf children called Preschool and Integrated Education for the Hearing Impaired and I was assigned the responsibility of project coordinator. For 10 years, I worked on that project, preparing project proposals, writing reports and coordinating the project. Reverend Suyambu, who used to travel to international YMCAs, inspired me to become a woman executive in the YMCA movement.

I completed my YMCA Secretaries training in the year 2004 and was the top among eight other secretaries from the whole of India including seven men and one woman. That gave me a chance to undergo two months training at the German YMCA Training College in Kassel. That was a very good exposure for me and to learn about International YMCA works.

India has a male chauvinistic culture. To climb up the ladder as a woman in professional life brings many slips. We face struggles not only in the workplace but also in family. As you climb the ladder, family expects you to be more and more submissive and tend to disrespect in all possible ways. A woman should learn to put on masks with different roles as an executive, as a wife, as a mother, as a daughter in law, as a housemaid and so on not over lapping each other. Financial independence is out of reach for the Indian woman, men always expect women to depend on them for everything even when she earns. Women do not have control over the money they earn.

I too had all these struggles and everything worsened when I was selected the General Secretary. Men around threw so many arrows targeting my modesty, character, and personality just for the simple reason that they were not given this position. It has shaken my family even. But the grace of God was with me strengthening and guiding me each day and every minute. Every problem taught me new lessons and gave me the confidence and courage to face life and to carry on my responsibility.

As of now, there are 114 YMCA secretaries across the nation and I am the first and only woman General Secretary in the Indian YMCA history. I deem it as my responsibility to train and offer opportunities for the women to take up leadership roles in the YMCA.

The number of female staff outnumbers men staff at the YMCA Madurai and I am so glad about this. The major initiatives of YMCA Madurai are centered around women. Especially the special schools catering to special-needs children, their mothers with skill trainings, the school for the hearing impaired also with special children, their families, offering serene accommodation for the working women and students through the women’s hostel, the whole of fund raising team [telefacing] are women, all the workers such as cooks, maintenance staff, care takers in projects are women who are deserted or widows. By this way, we empower them socially and economically.

COVID-19 at the YMCA Madurai

The global pandemic outbreak of COVID-19 has had a huge impact on the YMCA Madurai — especially the education of children with special needs, closing down of all service projects, and the income generation units except the women’s hostel where we had 30 to 50 percent occupancy.

The closure of schools not only impacted students, teachers, and parents, it also had a far-reaching economic and mental health implications. Most parents were not prepared to deal with the upheaval and this has placed a huge responsibility on the YMCA special educators who were co-parenting with parents over phone and digital media. They were trained on digital methods of training, in order to be able to cope with the additional challenges of children posed by almost a year of absence from school and being confined in small spaces. Gradually, we have informally kept the schools open so that whoever wishes to bring their children for a change was welcomed.

Many parents had lost their jobs and children had nothing to eat at home. With the support of generous donors and friends, we had distributed nearly 1,000 dry ration kits to families and also to the people with disabilities in the community.

My message to young girls: Look up and aim high. Situations may try to put you down, you may be left alone, have faith in God, believe in yourself and go ahead… You will be magnified in the same place where you were put to shame. ‘And, when you want something, all the universe conspires in helping you to achieve it.’ ~ Alchemist

The YMCA of Greater Seattle is committed to building a global community at home through partnerships with YMCAs across the world. Since 2014, the Bellevue Family YMCA has shared an International Partnership with Madurai YMCA, India. You can follow the Madurai YMCA on Facebook, Instagram and Twitter.

Sensitive Is the New Strong

A Live Online Conversation with Anita Moorjani and May Elawar

In a time when traits like sensitivity, kindness, and compassion are sorely undervalued, Anita helps empaths—whether emerging or acknowledged—navigate obstacles they may face and identify what makes them unique.

Throughout the history of the Y, it has been a place for people to reach their fullest potential in mind, body, and spirit. The Y in Seattle was actually founded by a group of young Seattle pioneers including Catherine Maynard. Their vision was to create an organization which would build strong kids, strong families and a strong community. Since then, the Y has adapted, grown, and changed, and that growth can often be attributed to the strength, knowledge, and community commitment of women in the Y movement.