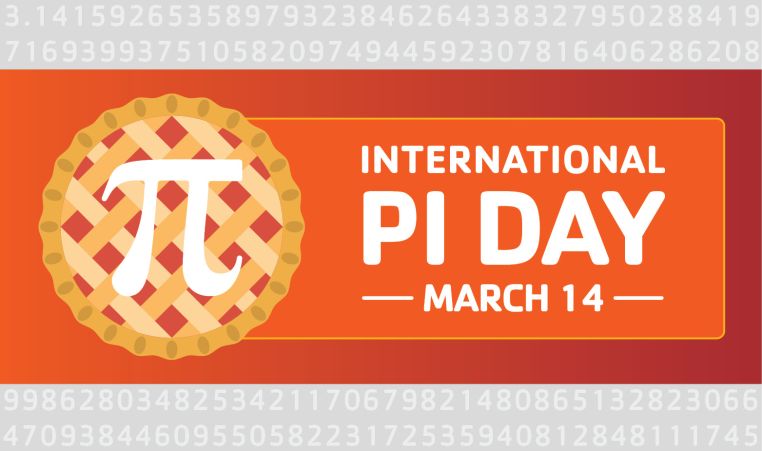 Just what is Pi Day, anyway?

Pi Day is an unofficial holiday that’s celebrated every March 14th in honor of the mathematical concept of Pi. Combine that with Pi’s homophone, “pie,” and the end result is a rather delicious and nerdy celebration. (And it helps that pies are typically circular!)

In mathematics, pi (which is sometimes represented as the Greek symbol for “p”) is the ratio of a circle’s circumference to its diameter. That is, if you drew a circle and measured its circumference (the length around the perimeter of a circle) and then divided that number with the length of that same circle’s diameter (the measure of a circle from left to right passing through the center point), your answer would always be the same: 3.141592… (The decimal places go on infinitely, so we’ll just leave it at that!)

More than just a useful mathematical tool, Pi has a reputation in the recording breaking community, as the decimal points in pi go on forever. In 2019, Google set a Guinness World Record by calculating pi out 31.4 trillion decimal place, but most humans who set out to memorize pi usually stick to the first 100 digits.

The rest of us non recording-break mathematicians commonly write pi as “3.14,” which is my we celebrate Pi Day on March 14th (3/14)! The first Pi Day was celebrated in San Francisco in 1988 as a way to raise awareness and bring greater attention to STEM fields and careers.

But how exactly can we celebrate Pi Day?

I’m glad you asked! There’s no wrong way to celebrate Pi Day, but here’s a short list of some of our favorites:

Baking a pie is certainly the obvious choice here, but it’s not your only option. If you do decide to bake, why not get the whole family involved? Baking together is a great way to build math skills for little ones who count and measure ingredients, and lets them practice their fine motor skills along the way.

If you’re looking to keep things simple, here’s an apple pie recipe with only 5 ingredients! If you’re a veteran looking to get adventurous, why not head over to The Food Network’s website, where they have a whole page dedicated to pie with hundreds of recipes! Oh! And don’t forget that pies don’t always have to be for dessert. Check out these savory pies too!

2. How Long Can You Memorize?

Just when you though this day couldn’t get any nerdier, it just so happens that March 14th is Albert Einstein’s birthday! In 2021, Albert Einstein would’ve turned 142 years old!

Pi Day doesn’t just have to be about exercising our minds, we can exercise our bodies, too! Break out those pedometers and head outside with the family for a 3.14 mile run, walk, or bike ride! If you head over to Greenlake Park in Seattle, that’s just one lap around the lake (if you take a pit stop at Starbucks for a drink-break and a few extra steps).

How you celebrate is up to you and your family, but Pi Day is a great excuse to inject a little extra math into everyone’s life. If you need a little extra celebration inspiration, a Google search for “Pi Day” is sure to turn up some impressive pies, fun math games, and a whole bunch of other creative activities! Happy Pi Day!

Find on-demand workouts, resources for keeping your brain and body healthy, and plenty of active activities for families.