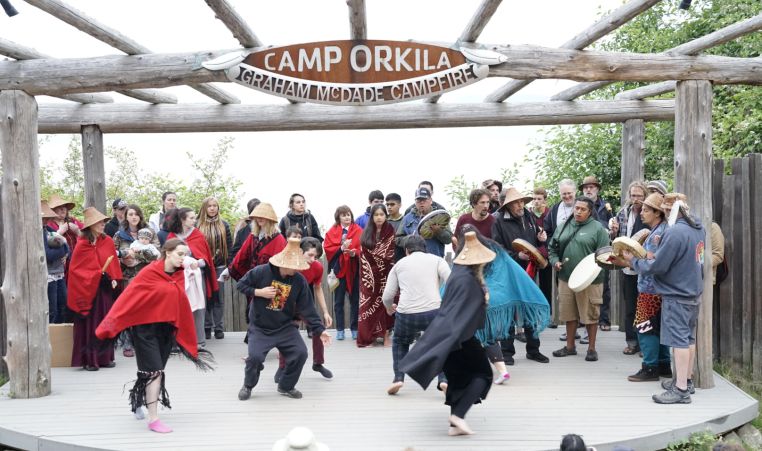 Earlier this summer on June 28, members of the Samish Nation took respite from their summer canoe journey to sing, share stories and offer a blessing of the ground at Camp Orkila.

Camp Orkila is growing and to accommodate more campers than ever before, we built four new cabins and to keep in the tradition of the camp, they were each given native names from regional tribes.

From The Islands’ Sounder article by Coleen Smith:

“Tribal leaders met and responded that they would be thrilled to have us use their name because Orcas [Island] was the ancestral home of their people for countless generations,” said Doug Boyden, who is funding the work along with his wife Nancy and fellow Orcas Islander Cliff Forbes.

YMCA Camp Orkila supporters, staff members and volunteers gathered on June 28 to welcome Samish and Lummi tribal members to the grounds. This the second year that Orkila has been a host to those on the annual canoe journey when Coast Salish tribes travel by boat through the Salish Sea. Over the course of several weeks, they paddle by day and stop at host locations to camp out and share oral history.

Sam Barr, a canoe skipper with the Stillaguamish Tribe, said the journey is part of the Coast Salish tradition of “making friends with neighbors.” He explained the magic of crews paddling in the sea together, a phenomenon called xéchnginglh, which means “hearts and minds are one.”

Tribal members old and young told stories, sang traditional songs and danced on a stage near the beach. They said such ceremonies “lift our hearts” and are “not entertainment but a sharing of knowledge and history.”

“As tribal peoples, we are surviving peoples,” Barr said.

The YMCA of Greater Seattle is proud to partner with tribes in our region to create a sense of community, celebrate the important contributions of Native people and bring to light, the rich traditions and histories of the tribes whose land we work and live on.

After storytelling and dancing, the tribal members blessed the ground where the new cabins would be built, preparing the land for hundreds of young campers to experience Camp Orkila.

Join the Y as a childcare teacher, lifeguard or kids' instructor