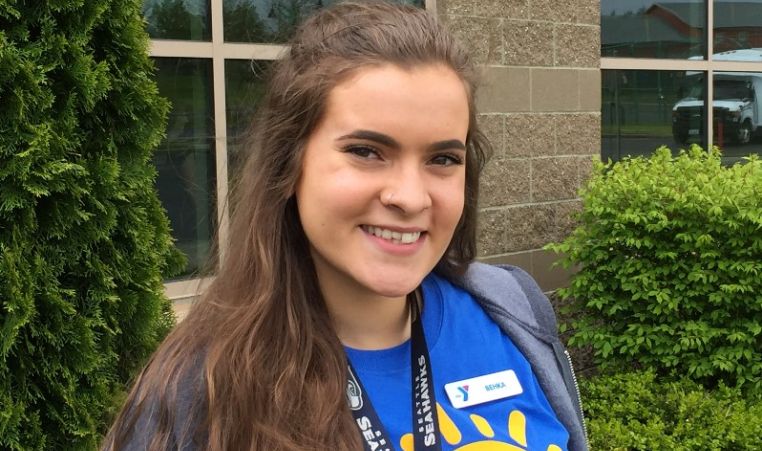 Behka became involved in the YMCA about two years ago. She first became a member, then started working in the Kids University program. She says she loves the Y because she appreciates the Healthy Living focus and its contribution to the community.

If Behka’s last name sounds familiar, that’s because you’ve heard it before. Her grandparents used to own the property across the street from Costco in Issaquah, now known as the Pickering Barn. Behka’s family has strong roots in Washington State. However, growing up, she moved around a quite bit and has also lived in Missouri, Utah, Idaho and Guatemala. Her large family includes 10 kids; 5 of whom were adopted from Guatemala. Behka speaks fluent Spanish, and is looking forward to going to Western next year, where she plans to major in International Business with a minor in Spanish.

In addition to working at the Y, Behka participates with the Youth and Government program and serves as a volunteer on the Teen Leadership Board. She enjoys Teen Leadership Board because she recognizes that the Snoqualmie Valley YMCA serves kids and adults well, but does not have a lot of programs for middle school aged youth. She has enjoyed planning teen late nights for this age group and appreciates the peer to peer influence the Teen Leadership Board is able to have with them. This busy teen also in the DECCA and ASB clubs at school and volunteers for her church.

In addition to school, work, volunteering and hanging out with friends, Behka is training for the upcoming Team World Vision marathon. She is excited about participating in this race, because it raises awareness about the necessity of having clean water in other countries.