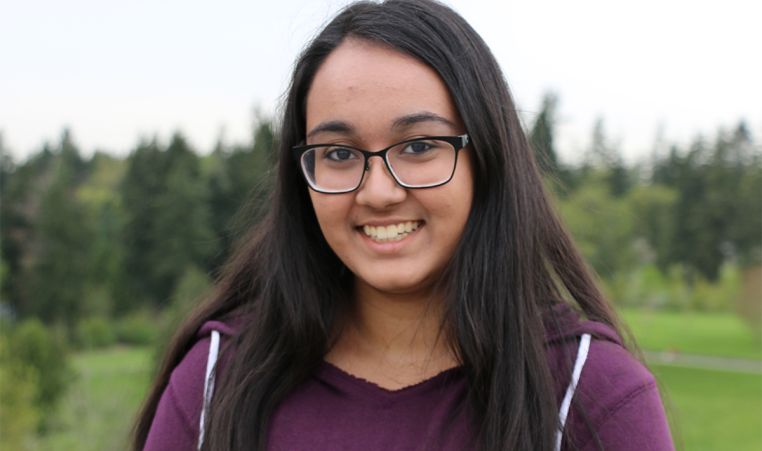 Roshni is a confident teen who isn’t afraid to jump in and be a leader, mentor, and friend to her peers. But if you’d asked her just last summer, she would have described herself as “the shy one who wouldn’t say much and let others take over—especially in group situations.”

Gently encouraged by her dad, Dipen, to join the Sammamish Community Y Teen Leadership and Volunteer Board, she’s now made new friends, developed leadership skills, and gained a new excitement for public speaking.

“I wouldn’t have tried public speaking if not for the Teen Leadership Board,” says Roshni. “I always dreamed of it but I’d never actually done it before. Through the Y I was able to collaborate with others and school doesn’t always offer that. I’ve had opportunities to organize big projects usually only adults would take on.”

“Eggstravaganza” was the first big event Roshni led with other teens. This year, 4,000 people attended the annual event at the Sammamish Community Y, but for Roshni that wasn’t the most exciting part.

“We had 80 teen volunteers and I gave a pep talk to pump them up. I was nervous but it was also exhilarating. I’d never given a talk like that in front of my peers.”

Her dad has seen a change in her as well.

“She knew she wanted to do something but she was very shy. I said to her, ‘just go and try it.’ Although she is only 15, I see real leadership in her and she likes to give back to her community. I’m super proud of her and what she has been able to achieve.”

Roshni’s favorite thing about volunteering is the chance to interact with other teens while creating a better place for the community.

“The Y has given me a great opportunity to expand in so many ways. The people here are really comforting and I feel so good walking in here. I have a second home and I’ve made so many friends I wouldn’t have met otherwise.”

“This is a safe place where teens can be mentored, regardless of things like race, religion, or income,” says Dipen. “The Y helps kids become independent and thrive.”