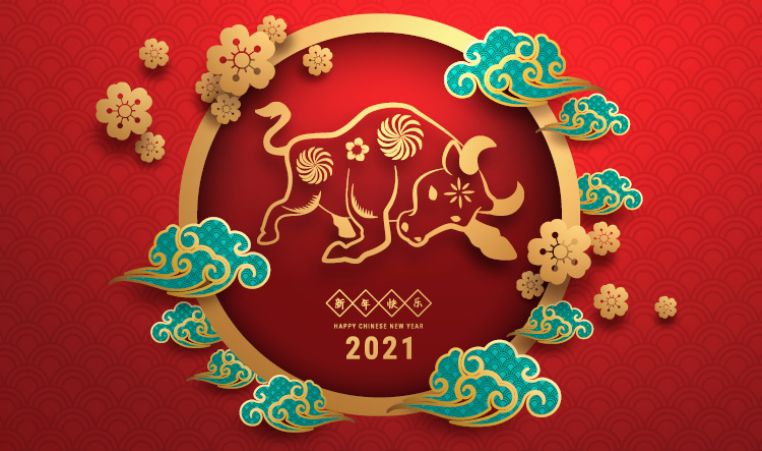 Lunar New Year, also called the Chinese New Year, begins on the first day of the new moon that lands between January 21- February 20 in celebration of the beginning of the new year on the traditional Chinese calendar. Chinese New Year is one of the most important holidays in China and is celebrated worldwide by those of Chinese descent. In 2021, the Spring Festival begins on February 12th and runs through February 26th.

February 12th marks the beginning of the year of the Ox. In Chinese culture, the Ox is a valued animal and considered an animal of strength because of its role in agriculture. Other positive characteristics, such as being hardworking, honest, intelligent, and reliable are attributed to the Ox.

The Chinese New Year is associated with several customs that vary regionally throughout China. Some customs include passing out red envelopes to family that contains money in order to pass along good fortune and blessings to loved ones, wearing the color red to scare away evil spirits and bad fortune, eating of traditional foods, such as long noodles to symbolize long life, parades and displays of fireworks can also be part of the celebration. Try making this Chinese pellet drum, called the Bolang Gu, as drums and noisemakers are a big part of the celebration!

The most important part of the Chinese New Year is the family reunion. People will travel throughout China to gather with their families for the New Year’s Eve dinner. This year, families may stay home but there are still opportunities to be together and celebrate virtually. Join the National YMCA Asian Pacific Islander Leadership Network on February 12th for the 1st Virtual Lunar New Year Festival or tune into the Bellevue Lunar New Year.

Check out the children’s book, A New Year’s Reunion by Yu Li-Qiong, a sweet story told by a young child named Mao-Mao about her family's celebration of Chinese New Year and her annual reunion with her father.

Find workouts and resources to help you engage with the YMCA from home.