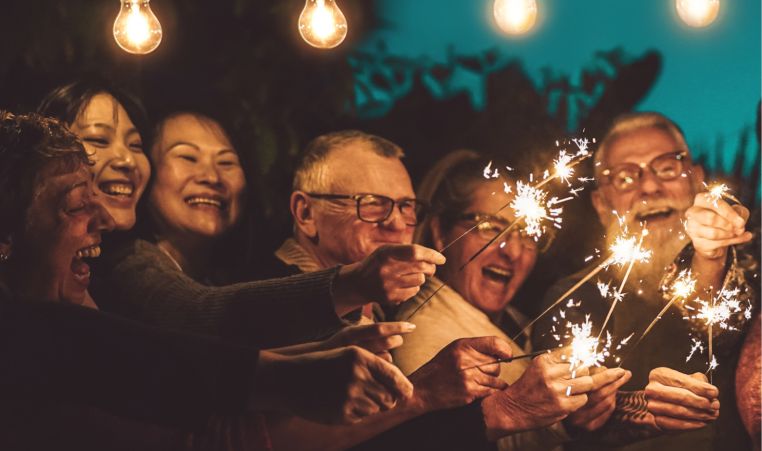 As children, many of us were comforted by our own family’s holiday traditions. Our sense of home was influenced by the smells, tastes and rituals of the familiar.

As we grow up and interact with more people from various backgrounds and cultures, we learn that there are many different ways to celebrate the holidays. Over Thanksgiving holiday, for example, some celebrate “Friendsgiving,” where friends who are far away from home for various reasons come together to feast and connect.

Ask anyone how they celebrate with families or on their own, and you'll often find that no two stories alike.

In a diverse world such as ours, we are truly stronger when we are inclusive, welcoming and celebrating all. The strength of our diversity becomes beautifully apparent during the holiday season in so many wonderful ways

Take a moment now to learn how others celebrate. In a lot of ways, we are distinctly different, yet equally special.

Hanukkah can also be spelled Chanukah. Both spellings are generally accepted so long as the total number of letters equals eight. The number eight represents the number of nights that, according to Jewish tradition, a small amount of oil miraculously burned providing light for the Maccabees to revolt and rededicate the Second Temple in Jerusalem. You can read a more detailed account of the story here. Hanukkah is not a major Jewish festival, but because of its proximity to Christmas, gift-giving has become more common amongst American Jews. Other traditions include frying potato pancakes with sour cream and apple sauce, playing a game of dreidel (spinning top) to win chocolate or small prizes, and lighting candles for eight nights in a row while reciting prayers.

Kwanzaa, meaning “first”, derived from “first fruits of the harvest”, is a week-long (December 26 – January 1) secular holiday that celebrates African heritage. It was created in the 1960s at the height of the Civil Rights Movement. Each of the seven days is marked with a candle lighting representing seven principles: Umoja (Unity); Kujichagulia (Self-Determination); Ujima (Collective Work and Responsibility); Ujamaa (Cooperative Economics); Nia (Purpose); Kuumba (Creativity); and Imani (Faith).

Known in Spanish as El Día De Los Reyes, January 6 marks the 12th day of Christmas celebrated in Spain, Latin America and many Hispanic communities across the United States. According to the Gospel of Matthew, the Three Wise Men (or Kings) found the newborn Jesus on his 12th day of life. The holiday is marked with many traditions, including gift exchanges, parades, baking of bread and other festivities. In some families, small gifts are left inside children’s shoes, which are left outside the door.

FEAST OF THE SEVEN FISHES

Italian Americans often celebrate Christmas Eve with many plates of food, including what is known as “The Feast of the Seven Fishes” or Festa dei sette pesci. This tradition was born out of the Catholic tradition to abstain from eating meat (poultry or beef) leading up to Midnight Mass on Christmas Eve. Instead, many Italian Catholics consumed fish, which turned into a holiday tradition. As a copious amount of food is central to Italian culture, many Italian American households serve more than seven dishes, including squid, cod, blue crabs, scallops, octopus, shrimp, clams, oysters, lobsters and more.

The Y is a place where people of all backgrounds, faiths and other dimensions of diversity can come together, strengthen community together, and gain a greater appreciation for one another. Learn more about our commitment to diversity and inclusion and feel free to reach out to us on Twitter (@YMCASeattle) with your own family traditions!

Every family has their own traditions and customs, giving life to treasured memories for generations.