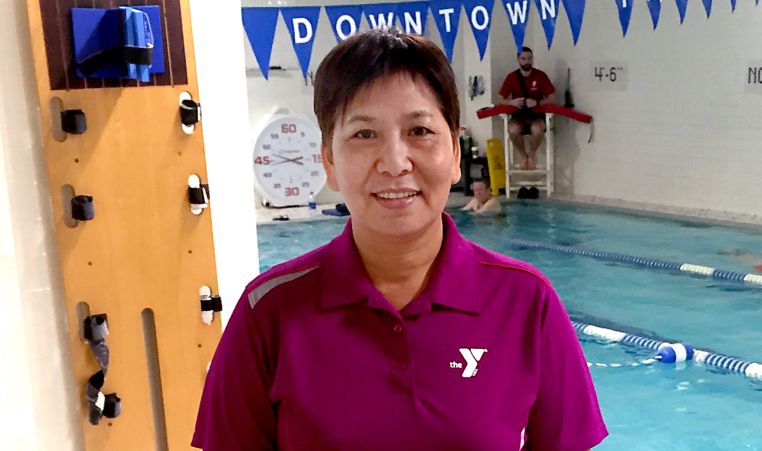 If you ever work out at the Downtown Seattle YMCA branch, you've probably seen Hulan before. She works on the 4th floor as a towel attendant, but behind her smiling face, there is years of competitive athletics, immigration and motherhood. Hulan immigrated to the US from China five years ago so she and her husband could stay close to their 26-year-old daughter. In China, Helan was a champion swimmer and wind surfer.

Hulan is from Beiha City, Guahgxi, China, on the coast. From an early age, Hulan was in love with the water. "It's like a faith for me, it's where I feel my most happy, excited and relaxed." At 6, Helan began swimming lessons, by 8 she was competing. By her teen years, she was taking breaks from school for swimming competitions. By 19, she was ready for her next challenge and in just four months learned to windsurf and competed in the national windsurfing competition, in which she took fifth place. Fast forward just two years and Helan took first place in all of China for windsurfing and third place worldwide.

In 2012, at age 51, Hulan competed in a biathlon of running and swimming, and despite getting a severe leg cramp, she still finished sixth place overall. She was up against people who were half her age, and she still came out ahead. In China, Helan is famous. But she was willing to give all of that up when her daughter said she wanted to move to the United States.

The move was difficult, away from her lifelong home and the comforts therein, Helan began seeking her happy place, the water. When Helan relocated to Seattle, she joined the Y to use the pool and to make new friends.

While at the Y, Hulan discovered our English as a second language class specifically for native Chinese speakers. Helan participated in the weekly language class taught by Tiffany Tiu, a Downtown Branch employee. Thanks to the class, Hulan learned enough English to get a job working in the branch, and additionally teaches weekly adult swim lessons in Chinese.

A few months after Hulan began her job with the Y, an elderly woman who only spoke Chinese had a medical emergency in the steam room. Helan was standing by, ready to help the woman communicate with emergency medical services. Tiffany Tiu, branch employee said, "That's why you have to keep people that reflect the people we serve on the team."

Helan is an athletic inspiration, a lifesaver and a testament to human resiliency and the power of community.

Category: Community
PREVIOUS STORY
5 Tips to Get your Foster Family Back-to-School Ready
NEXT STORY
The Kent YMCA has broken ground

Water Safety and the Y

Teaching children how to be safe around water is not a luxury; it is a necessity. The YMCA’s Safety Around Water program can help you make sure they learn essential water safety skills, which can open up a world of possibilities for them to satisfy their curiosity safely.