Ella Baker: A Black Foremother of the Civil Rights Movement

Ella Baker: A Black Foremother of the Civil Rights Movement 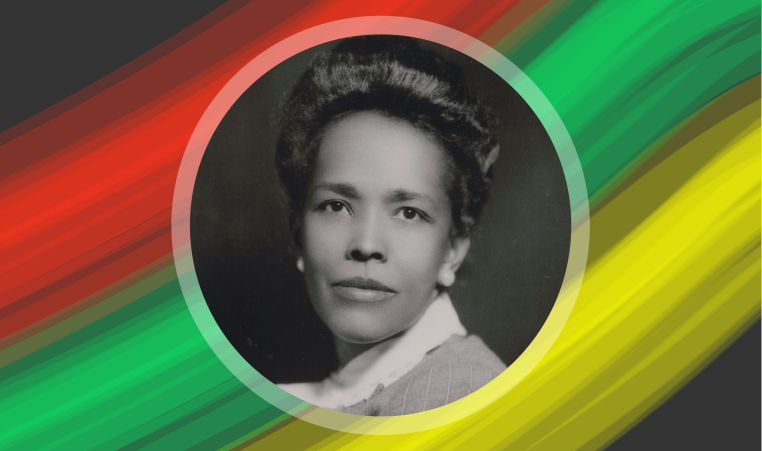 sung by Sweet Honey and the Rock

In preparation for Black History Month, I found myself remembering my grandmother, Gladys Santina Hall. Raised in the Jim (and Jane) Crow south, in Macon, Georgia, my grandma experienced discrimination at every turn.

Being poor, Black, and a woman in the south, she experienced a complex form of triple oppression, by racially discriminatory laws, lack of women’s rights, and attacks and biased aggression from individual people, both Black and White, male and female, saint and sinner. This reality, however, never compelled her to change her witness, her resolve.

Because of her race, gender, and economic status, she was denied access to many spaces and places. My grandmother encountered behaviors and messages daily that sought to dehumanize and strip her of her dignity, nevertheless, she withstood all that was thrown at her. She held her head high, never lost her confidence, never relinquished her pride or conviction in what she felt was right. She insisted that the most vulnerable were worthy of dignity and respect; that Black lives were precious; that my life and my existence in this world was sacred. My grandmother’s life and ministry provided an impenetrable foundation, the keynotes for the rhythm of my life and work.

I remember a word of caution she would constantly say to me, “Baby, work while it’s day, because when night comes no man can work.”

To me, this meant that as long as I had breath in my body, I had a responsibility to ally myself with the dispossessed, those most impacted by racism and other forms of oppression.

Wading in the memory of my grandmother’s words has reinforced in me the importance of honoring and focusing on the role that Black women have played in advancing the causes of Black people around the globe. I recall Black women such as Septima Clark and Fannie Lou Hamer, who advanced the Civil Rights Movement and receive little attention today for their contributions. I attribute the lack of acknowledgement in part to the patriarchal and racist realities and norms that have forced some Black women to the margins.

Black women, then and now, navigate multiple forms of oppression. Patricia Hill Collins, Distinguished University Professor of Sociology Emerita at the University of Maryland, College Park, argued in her 2009 book “Black Feminist Thought,” that Black “women’s survival itself is a form of resistance… and represent the foundations of Black women’s activism.”

A knowing so deep

Black women have always maintained a unique and liberatory standpoint for critiquing the social order. Toni Morrison captured this in a short story directed at Black women.

“No one knew your weight until you left them to carry their own. But you knew. You said, ‘Excuse me, am I in the way?’ knowing all the while that you were the way. You had this uncanny ability to shape an untenable reality, mold it, sing it, reduce it to is manageable, transforming essence, which is a knowing so deep it’s like a secret.” -- from Morrison’s “A Knowing So Deep”

This “uncanny ability to shape an untenable reality” was forged through slavery, Jim and Jane Crow, and contemporary realities that continue to affect the experiences of Black women at the intersections of racism, heterosexism, gender, class, and dis/ability, just to name a few. Yet, they have led the way, often from behind the scenes – from the margins.

My grandmother’s words again enter my mind, her life and lessons wade in the same ancestral wake of resistance and liberation, often fighting from the margins: my grandmother, Clark, Hamer and so many others advanced equity and justice for Black and other historically marginalized people, and then there was Ella Josephine ”Jo” Baker.

Without Baker there would not have been a March on Washington, a Selma March, mass Black voter registration drives, sit-ins, or many of the other major non-violent Black Freedom Movement campaigns. Her uncanny ability to organize and keep the movement moving forward was “radical, international, and democratic, with women at the center.”

Baker, considered by many a mother of the Civil Rights Movement, worked more than 50 years (1930-1980) to organize communities and advocate for civil rights.

She played an instrumental role in the National Association for the Advancement of Colored People (NAACP), helped establish and organize the work of the Southern Leadership Conference (SCLC), and provided direction, mentorship, and the intellectual and philosophical foundation for grassroots organizing and democratic leadership that helped establish the unique structure and transformative work of the Student Nonviolent Coordinating Committee (SNCC).

In 1988, Sweet Honey in the Rock, a three-time Grammy Award-nominated African American all-woman a cappella ensemble, was looking for a new song, one which would help connect the present-day work of civil rights to the past. They produced “Ella’s Song,” as a tribute to black women in struggles for freedom and to Baker herself. Through harmonies, many voices, regardless of skill, are invited to join in singing. The song becomes an invitation, with no gatekeepers to decide who has the chops to sing, many voices of all skills come together to create one unified, layered and complex voice.

Like the song, Baker also saw the power in many voices coming together. Baker, argued Patricia Parker in her book “Ella Baker’s Catalytic Leadership,” believed in “bridge leadership,” a form of grassroots leadership that centers on cultivating power from the bottom and margins, instead of from the top-down.

This placed Ella in conflict with many of the Black male-dominated circles of the Black Freedom movement, which were greatly influenced by the patriarchal mores and norms of the Black church that centered power with a single charismatic leader – this is also why she experienced much resistance during her time serving with the NAACP and as the Executive Director (though sadly never officially recognized by Dr. King as such due to her gender) of the SCLC.

Baker’s founding of SNCC – a primary channel of student involvement in the Black Freedom Movement – gave her an opportunity to directly shape the philosophies and strategies for direct action of an inter-racial contingency of young people in the movement.

Baker worked to ensure that youth had the autonomy needed to determine their priorities and strategies for working towards social change. While she was not hands-off, because she believed in collaborative, dialogical forms of education, she ultimately was convinced that with the proper political training, young people should have leadership and agency over their own freedom.

Moving from permission to freedom

We still see glimpses of Baker’s lessons today. Reflect on the powerful words of 22-year-old National Youth Poet Laureate, Amanda Gorman in her powerful poem, “The Hill We Climb,” and hear echoes of the past calling for unfinished work to be resolved.

Gorman’s poem carried echoes of African American civil rights and human rights activist Ella Baker, who said, “Give light and people will find the way.” She recognized that “the young people were the hope of any movement.”

Today, youth in America are making strides to change the world around them. From powerful social media movements to political organizing and protesting on the ground, the voice and passion of young people have convinced society to take young people seriously. The DREAMers (for the Development, Relief, and Education for Alien Minors), Standing Rock #NoDAPL protest, 2018 March for our Lives protest, and 2020 Black Lives Matter protests all centered youth voice and activism in fighting to shape a better world, a more humane world for all people, but especially Black, Indigenous, people of color (BIPOC).

We often speak about “Youth empowerment.” However, Empowerment (definition: authority or power given to someone to do something) typically means that a person in power shares their power with others. This requires individuals to ask for permission to access that power.

The Y is highlighting how Youth empowerment is happening in communities, especially among those most impacted by racism and others forms of oppression. We are not redefining “Youth empowerment,” as a concept, we are getting out of the way of Black youth, who sit at many intersections of gender, gender identity, age, abilities, and health means to move to a place where they practice their own internal power and brilliance, without asking for permission, and in the process define what freedom means to them.

On February 28, 2022, from 5 – 6 pm, we invite you to join us in this work, as we reflect on Baker’s lessons, engage with youth and seek ways to turn power from a privilege that is given, into a right that is inalienable by virtue of being. In the spirit of Ella Baker, join us for Black Youth Empowerment: Moving from Permission to Freedom, a crucial and necessary Y Community Conversation. RSVP now, our event is free and online.

Let us remember the words of Ella’s Song and gather to seek solutions together, “We who believe in freedom cannot rest until it comes.” Youth have something to say about this. It is time for us to listen to them speak and lead.

David L. Humphrey Jr., Ph.D. is a Senior Vice President and Equity and Justice Officer with the Y's Equity & Justice Center of Excellence. Learn more about his work.

At our core, we believe all children deserve equal opportunity to learn, grow, and thrive. Join us!